Jesse, Seppi and I, decided to go for a morning paddle over to Daufuskie Island crossing Calibogue Sound paralleling  Daufuskie. As we approached the Melrose area behind the sand bars mid Daufuskie way out front, Jesse sees the Tybee Island Lighthouse and puts his head down and paddles toward Georga. Seppi and I were checking out the sand bar as Jesse puts distance between us. Knowing I will not catch up, I paddle back to Harbour Town and hop in the center console heading over to Tybee looking for Jesse lending support for his crossing. I found him close to Tybee Roads in front of the Jetty  as a huge freighter crosses his path sending large swells from its wake..  He crossed the Savannah Channel among  turbulent currents and moving tide heading towards the lighthouse. I wait for him just outside the shallows as he completes the journey. A  Light House to Light House Paddle.. He paddled 12 plus miles navigating  the bars, shoals and currents.
Below is Jesse's  quote and a his photos from today.. A well deserved Beer, or Two 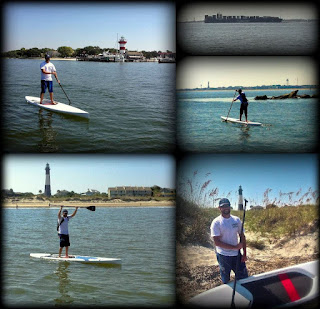