The two C4 9-3 Sub Vectors arrived this late afternoon, Thanks to Jamie.... As I pulled the well packed boards out the boxes and discovered they arrived in perfect condition. Got lucky this time. The boards were beauties to see. Called Jamie to tell him the boards arrived and he was over before I hung up the phone...The rocker and flat bottom in the mid section with its hard edge tucked under rails or angular boxy rails like the boards of the mid 80's. The double barrel inverted"v" panels thru tail and concaved deck with a high arch in tail area anatomically fitting to your foot. The color graphics looked cool as I have the red and black nose and Jamie took the yellow/ gold jet rocket graphics. It was a bit odd that the boards arrived with 2+1 fin set up but its marketed as a five fin Quad. You would think 4 fins would be included. I'll have to order the larger future fins if I want to Quad it.. Maybe 450's or 437's ...
The boards were only out of the boxes for two hours and I had to christen mine for a flat water paddle. The air was 41* f and NW winds blowing so I stayed in the harbor..As you all know, when one gets a new board the surf gods never cooperate.. I jinxed us for a few days.. Sorry guys... Stopped at Scott's Fish Market( now open for the season) to show Scott and have him snap some pics..
The board paddled great in the flat water. It yawed a little but will have to set up the right fin placement. I stepped forward a bit and it seemed to track better. The floatation was great see pics. I'm close to 200 now with suit and I was above the waterline. The stability was great. It rolled rail to rail about 10-15 degrees from flat center and stopped. It recovered quickly. Took effort to really put the rails under. Standing on the board looking forward and aft, the board looks small. 4 ft in front 4 in the back .. Cant wait to get it on the waves.. I know I demo'd the board several weeks ago but now its time to play... I'm glad we ordered the boards most are sold and I hear there is a waiting list for these new boards..
I need to get pics of Jamie on his SV.
A nice pair.. Jamie's on right 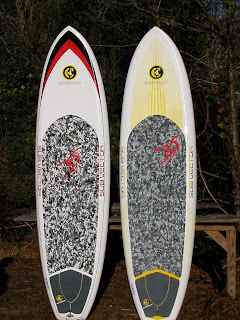 Bottom views of the SV's 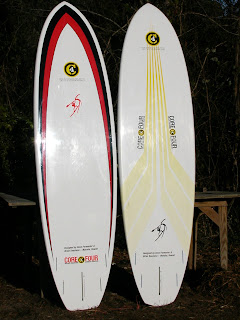 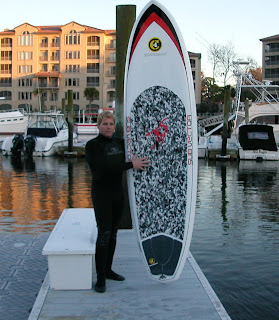 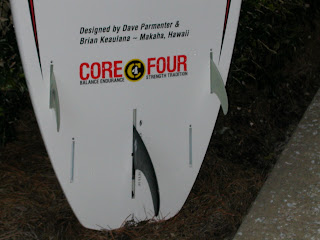 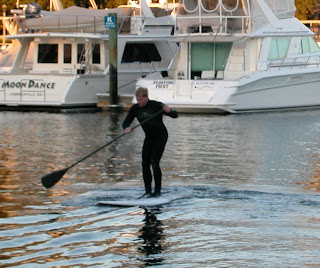 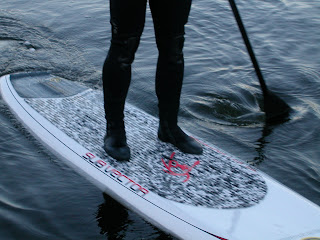 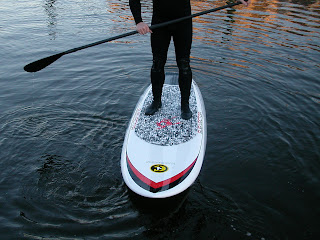 Looks small but my feet are high and dry. Bring on the surf. 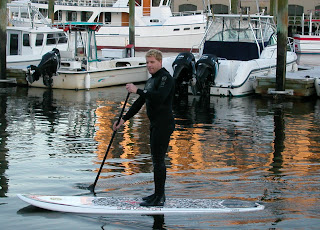