Humbling experience when paddling out..

Good friend Tim Neil (Beach Break Grill) was up at North Carolina's Cape Hatteras outer banks during the nor'easter and Hurricane Ike last week with his son Cooper surfing in the Easterns. . On one of the bigger days he took some pic of three guys on Stand Ups trying to paddle out in the 7-10 ft storm surf. Tim watched and recorded their 1/2 hour attempt to make it outside almost 1/4 mile to the break. Needless to say they were denied access to the break and suffered a humbling experience and deflated egos. Tim said one was almost close to making it outside but a four wave set at 10 ft plus with six rows of white water sent him back to the shore break. I'm sure my friends and I would of tried too. Some pics of their attempt..
..........................
A 6 ft inside reform and look at the outside plume.. What would go through your mind in that situation? 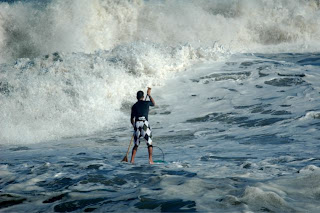 Cleaned up and denied. 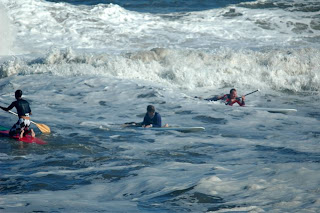 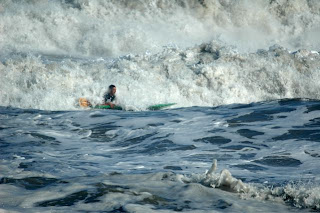